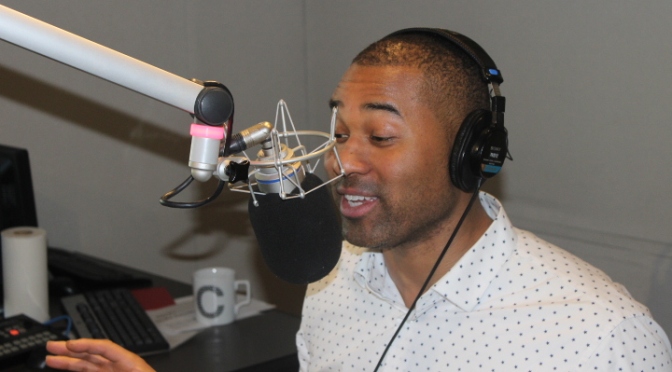 We are in the large CHUM building by Scotiabank Theatre. Cabbie is taking me all over the place looking for somewhere that we can shoot. He introduces himself to someone and explains our situation.

“Hi, my name is Cabral, do you know if there’s anyone here who can let us into the green room, “

It’s a Sunday evening so naturally the building is empty, everyone is likely at home. We walk through several sets and offices spaces looking for acceptable lighting, our search bears no fruit and we end up in a small room that appears to be a shared work space. Ironically enough right beside that green room we couldn’t get into.

In Canadian sports media, Cabral Richards is unquestionably a legend his interviews have shown sides of the athletes that otherwise would have been uncovered. Whether it is asking to go inside Kobe Bryant’s house or beating Ryan Getzlaf one on one in road hockey, he consistently puts the subject in a peculiar position. He has a unique ability to get athletes to buy into whatever hi jinks he has in store that day.

One of his most memorable was a left handed pitching contests against Hall of Famer Pedro Martinez. His eyes get wide as he tells the story.

“We had like a speed gun, I threw 30 with my left and then Pedro threw 60 with his left. Which blew my mind, that was pretty funny. That was the first time I did like a game, or brought a prop into an interview. He was totally about it, I got him on the right day of the week when Boston was in Toronto at the Skydome and he was a legend. “

Richards interned as a scriptwriter before pitching a short streeter segment centered around his outward personality. 18 years ago Cabbie on the Street aired on The Score. Cabbie On the Street has grown into its current form of Cabbie Presents on TSN. He’s interviewed many of the greatest in sports like Kobe Bryant, Michael Jordan, Sidney Crosby, & Aaron Rodgers.

The animation seen on screen is just as vibrant in person. Richards recalls memories of wanting to be actor, as a teenager his aspirations were for the big screen.

“I was trying to be an actor, I wanted to be in movies like Will Smith & Denzel… I would steal so much of Will Smith’s material but I still wanted that gravitas of a Denzel Washington.”

I ask him about some of his misfires, the ones we’ll never see and the ones that got away. In 2009 he had approved for credentials to the Chevron World Challenge a charity golf event hosted by Tiger Woods. Just days before the event Woods announced that he would not be appearing in the tournament due to injuries.

“It was the end of November, and we got the word like Tuesday ‘You guys are credentialed you have a chance to get Tiger Woods’. Thursday his wife hits him in the face and everything changed”

There is not one true predecessor to Richards, at least not in sports. Hits From the Street started in 2000 on Black Entertainment Television, hosted by Al Shearer was an early influence on Richards. He would travel to college campuses and different neighborhoods, and get people to laugh with relative ease.  Cabbie credits Shearer as being one of the inspirations to the content he would eventually begin to create.

“He would make fun of people on camera and it was funny, I choose to make fun of myself first. And if I’m gonna make fun of someone is gonna be a real softball. It’s just funnier if I make fun of myself, I’m an easy target I’ve been fat my whole life…His fearlessness, his ability to go to random neighborhoods in New York and get funny reactions out of people. I really respected that ability.”

He is closing in on 20 years on the air and does not show any signs of slowing down. Cabbie Presents: The Podcast is a sizable shift for his fans that have been following him since his days at The Score. Richards is known for short fun interviews but podcasts allow him to facilitate a more of a full fledged conversation.

“It allows me to spend more time with an athlete or entertainer. Where the conversation tone wise and thematically just to be like we’re sitting in my kitchen.”

I asked Cabbie to compare his early career expectations to what he’s done over last couple decades. He didn’t have the foresight to see how impactful his work would be.