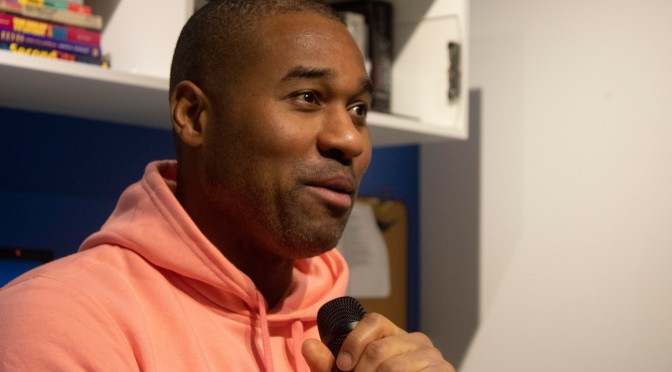 Edited and curated by Adriel Smiley

In 2001, Cabbie On the Street premiered on a fairly new sports network in Toronto, The Score. Cabral Richards talked to people on the street about the national anthem being played before games. The segment ended with Cabbie singing to the anthem to a baby who burst into tears. Unlike anything else on Canadian television at the time, he quickly became a star interviewing greats like Kobe Bryant, Drake, Sidney Crosby & Mike Tyson. Now he hosts Cabbie Presents on TSN and hosts the Cabbie Presents Podcast. An indisputable OG in Canadian sports media, Richards took some time out of his busy schedule to answer anything that I would ask. I wanted to know the secret his success and the recipe behind his consistency. 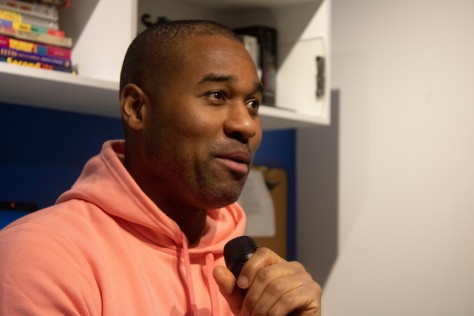 Man I’m a lot older than you, so I think my first sports memory would be the 1985 Blue Jays. They won the pennant the AL East and they played the Kansas City Royals in the ALCS. I believe the Blue Jays were up 3-1 and they collapsed. (He gets excited as he something comes to his mind) I remember going to exhibition stadium when I was kid and watching Jays games with my friend Ari and his dad. And then Bat Day, you get these mini yellow bats the date on it and whatever… so I remember Bat Day fondly.

Is there anything you would change about the way you were raised?

What a great question. We’re so formed by our experiences, so if you like yourself as an adult…(He pauses as a fire truck goes by) you either had a great childhood or a terrible one and you succeeded despite… Being from a Caribbean background there’s a lot of tough love in the house not a lot of high fives, hugs and I love yous. I would change a little bit of that but I do like the work ethic that was instilled. I wouldn’t be able to succeed, I wouldn’t be able to do what I’m doing now. I just started this segment on my own nothing was handed to me. Overall I would keep it the same, maybe I wouldn’t be a bed wetter. I wet the bed til I was 13, true story.

Did you tell your parents of your TV aspirations?

Caribbean parents are kinda weird. Because I’m the son of two immigrants they generally want their kids to follow academia. Lawyer, dentist, doctor, engineer those are the traditional academic job fields, that wasn’t for me. Entertainment was more the stream I wanted to follow. Will Smith and Denzel Washington were my heroes growing up. I would steal so much of Will Smith’s material but I still wanted that gravitas of a Denzel Washington. Acting is what I wanted to do when I was very young.

Did you see anyone on the sports side doing what you were doing?

No. There wasn’t anybody doing what I was doing. I’m not sure when Rick Mercer started the bit talking to Americans. He would just go to these border cities along the Canada/US border and he would ask Americans Canadian trivia. Obviously they didn’t know so it was funny for us ‘HaHa you don’t know anything’. But I don’t remember watching that til I was in university and perhaps subconsciously that informed me a little bit but as far as sports… (he squints a little as something pops into his head) Oh I guess maybe Ahmad Rashad. Ahmad Rashad was a studio host for Inside Stuff.

But he wasn’t really on the street like that.

No, he was always in studio or on location with an athlete doing an interview. He was affable and likable, but Ahmad I don’t remember doing silly stuff. He may have but I don’t remember him specifically being a goofball.

Other than Cabral Richards who would you credit with your success?

There was a guy on BET his name was Al Shearer. He was on BET late 90’s, he would go to university campuses, college campuses in the states. He would make fun of people on camera and it was funny, I choose to make fun of myself first. And if I’m gonna make fun of someone is gonna be a real softball. It’s just funnier if I make fun of myself, I’m an easy target I’ve been fat my whole life…His fearlessness, his ability to go to random neighbourhoods in New York and get funny reactions out of people. I really respected that ability. I would say Hits From the Street was instrumental in the stuff that I eventually created.

Do you have a ritual you do before every interview?

(He shakes his head as he begins to answer)

This is going to sound so cheese. I heard this line from a famous acting coach who is no longer with us, this guy named Larry Moss. Larry Moss worked closely with Hilary Swank, Hilary Swank is a two time best actress award winner. He just said ‘Just Be Excellent’. So before interviews I’ll go up to a mirror and make sure that my tie is okay and that I don’t have anything in my nose and I’ll just repeat ‘Be Excellent’ in the mirror. Like 49 times quietly to myself and then I go do my interview.  I don’t know its so cheesy, it’s just a positive reaffirmation, (I) speak it into existence.

What from your time at Ryerson has stuck with you all these years?

Ryerson taught me to make friends with people more talented than you. I got humbled very quickly when I got to Ryerson, leaving my high school I thought I was the funny guy, big personality guy. As soon as I got there two or three of the dudes who were in my inner circle were way funnier than me. It would be the equivalent of being Kevin Hart then going (to school) and your friends are Eddie Murphy, Chris Rock and… Dave Chappelle. It was established early that there are way more talented people at school. I always find that competition is good for the marketplace. That was a good blessing to learn early.

You said you’re never retiring what does Cabbie Presents look like in 20 years?

I’m gonna be in my 60’s, fat, bald.. I mean it’s going to be pretty wild, there will be adventures. Jackass, meets Willy Wonka’s Chocolate Factory meets Korean Karoake. A giant mashup of insanity.

Will you still be playing floor hockey with people and riding tricycles that kinda thing?

Excellent question. Yes! We’re going to be in an era of anti-gravity so we’ll be racing drones from inside of a drone. There will be a segment where I go to the edge of the earth’s crust. There’s gonna be some underwater stuff. High powered transparent modules.

You have a phenomenal budget in 20 years

I do, I do. It’s all gonna be sponsored by Tesla, I’ll be working for Tesla at that point. The Tesla Adventures? Or Richard Branson or one his kids who will take over the Virgin empire that’s what we’ll be on.

This interview has been edited and curated by Adriel Smiley.

The Cool Table goes LIVE every Wednesday @ 11 am